This isn't really homemade since I used store-bought dough and sauce, but recipe #3 has the recipes for those for the full homemade experience. I mostly just wanted to experiment with par-baked crust.

I used an 18 oz. package of refrigerated pizza dough, cut in half to make two medium pizzas, 9 oz. each. It's possible to make 6 oz. personal pizzas, but I don't like the crust-to-pizza ratio of a small pizza.

Take the package of dough out of the refrigerator and remove from the bag. Divide into 9 oz. servings (they were actually 9.3 oz. each). Form into a ball and place each in a separate lightly oiled bowl and cover with plastic wrap.

Remove from the bowl and form two round or rectangular pizza crusts. If the dough is too elastic, let rest for 20 minutes and try again. I had to do that because the dough would spring back to this size, and this is too small and too thick.

After one 20 minute rest and more stretching this is what I got. I could do one more round to make it thinner, but this size is good because I can fit two pizzas on a single half-sheet baking pan, which makes baking easier. Also it fits in a zip-lock bag.

The reason for this technique is that I'm not that great at sliding a raw pizza dough off the peel and onto the pizza stone successfully. Using a partially cooked crust eliminates this problem, and reduces the amount of semolina flour you need on the peel, which makes less of a mess on the pizza stone.

Also, the preparation step above is time-consuming, so it makes sense to do it once for two pizzas and freeze one if you don't want to make two pizzas at once.

Lightly oil a half sheet baking pan with spray oil.

Transfer the prepared crusts to the baking sheet.

Cool on a wire rack. I probably should have made the crust much thinner, because they really expanded in thickness while baking. They're more like a Boboli than a thin-crust pizza!

Maybe I should try to stretch 6 oz. of dough to this size and make 3 crusts next time.

I started with this recipe which has many good pointers.

Preheat the oven to 450°F for 25 minutes with the pizza stone.

Dust the peel with semolina flour. Put the pizza on the peel.

Slide the pizza onto the stone and cook until done. Cook for 8 to 12 minutes. That's 8 minutes and it's fully cooked but maybe 10 minutes should get the crust a little more crispy.

And done! It was good. Half of it was a good serving for me, so I vacuum sealed and froze the other half.

This time I tried making 3 pizzas from an 18 oz. package of refrigerated pizza dough. Each was 6.3 oz. and instead of using a bowl I put them on a lightly oiled sheet pan as the dough didn't expand that much last time and I didn't want to deal with 3 bowls. Cover loosely with plastic wrap.

After warming up to room temperature for 2 hours:

I let it sit for 20 minutes, then stretched it again.

I let it sit for another 20 minutes, then stretched it again. That looks good.

I could stretch it one more time, but at the current size it will still fit on a half sheet pan.

The thickness is better, but it still could be a little thinner. The bigger problem is that these don't look big enough for two servings each, which means that I actually have more dough, 6.3 oz. per serving, instead of 4.5 oz. per serving for half of a half package.

I made it again as a sausage and green pepper pizza and it was really good! I used Jimmy Dean spicy loose sausage, previously frozen, around 3.0 oz. I cooked the sausage before adding it to the pizza. I also forgot to add the mozzarella until after I put the topping on, and it worked fine. It basically melted off the toppings.

This time I used a 20 oz. package of Portland Pie Shipyard Beer pizza crust, divided into 4 servings of 5.2 oz. 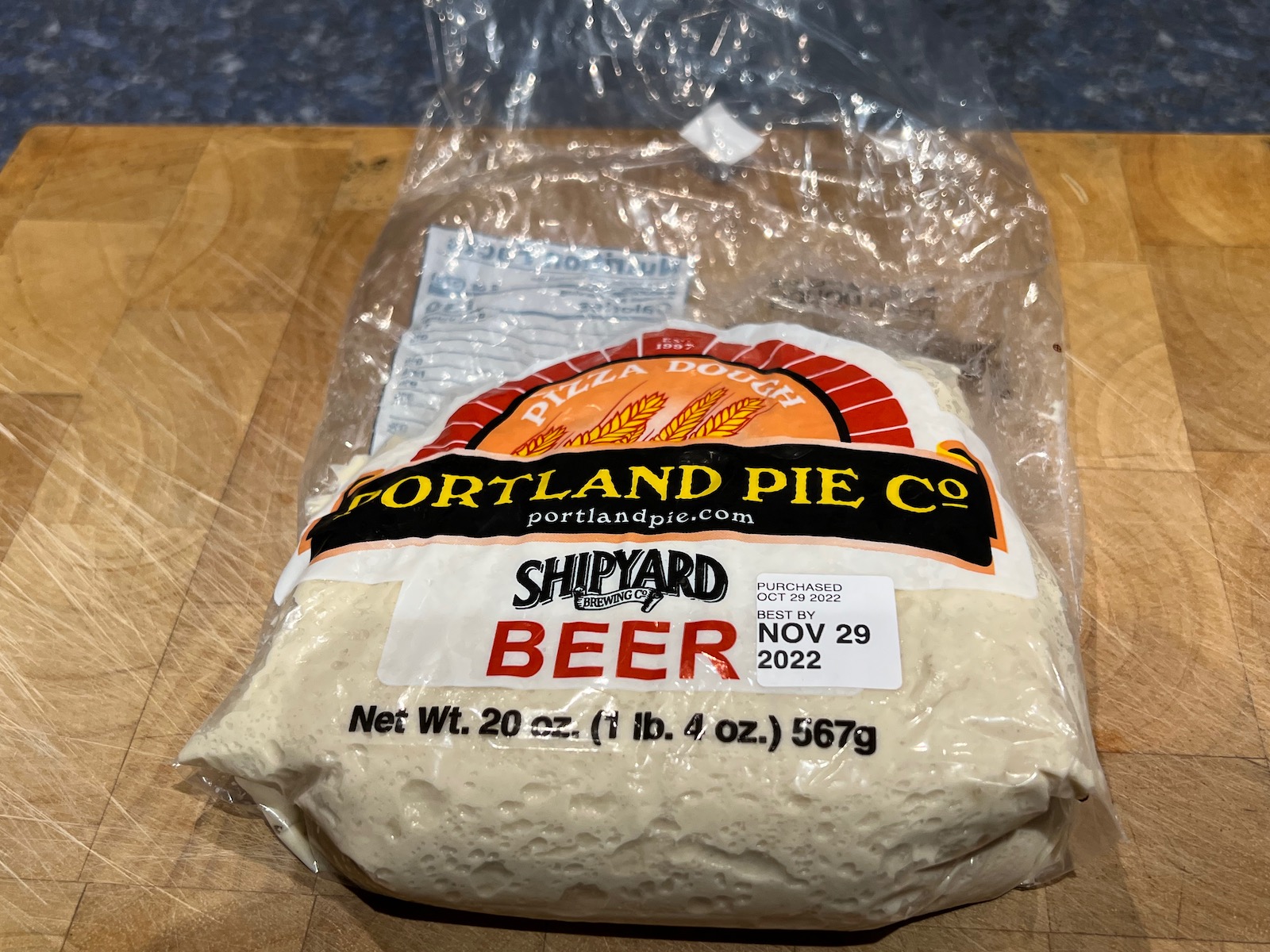 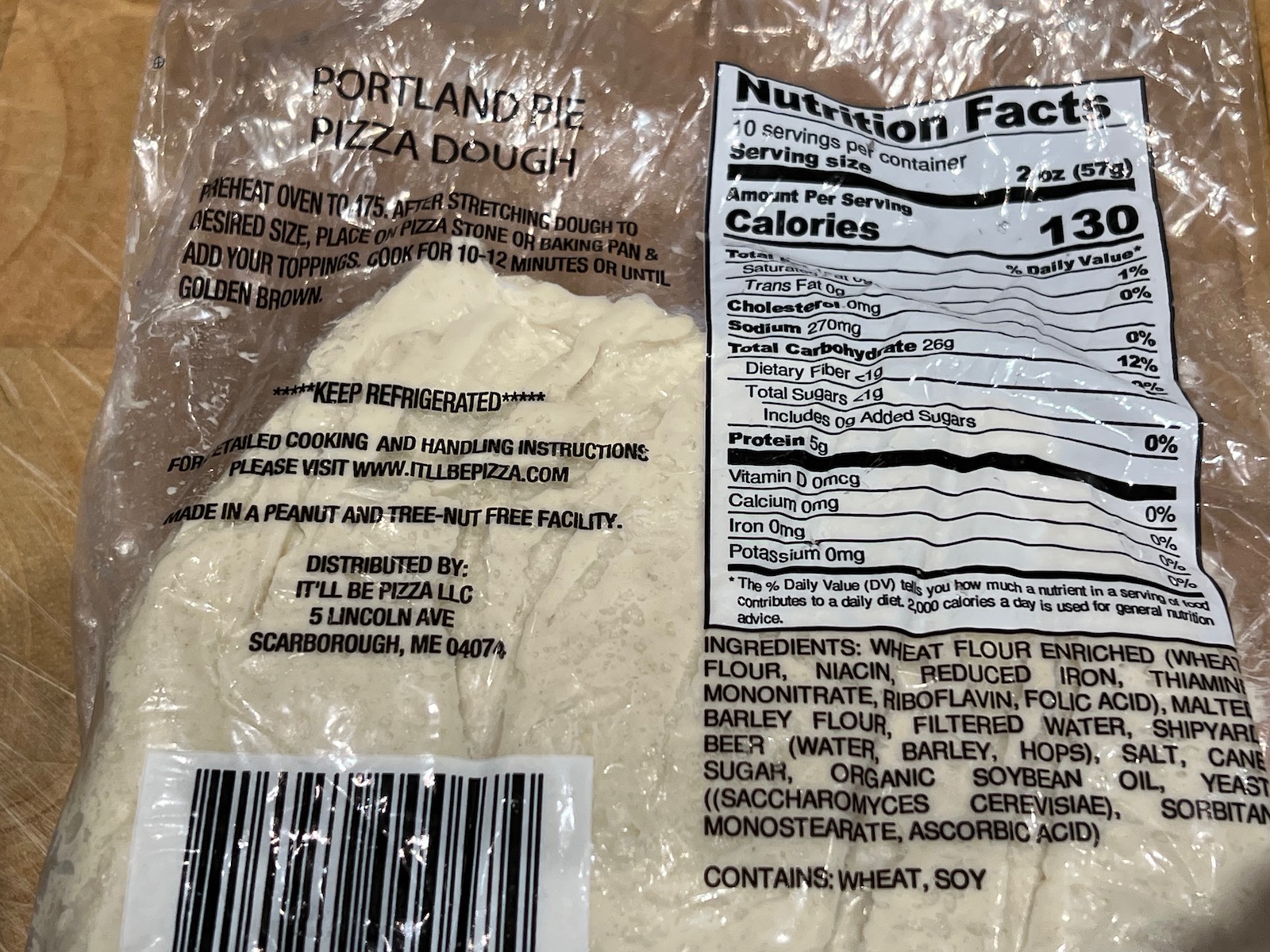 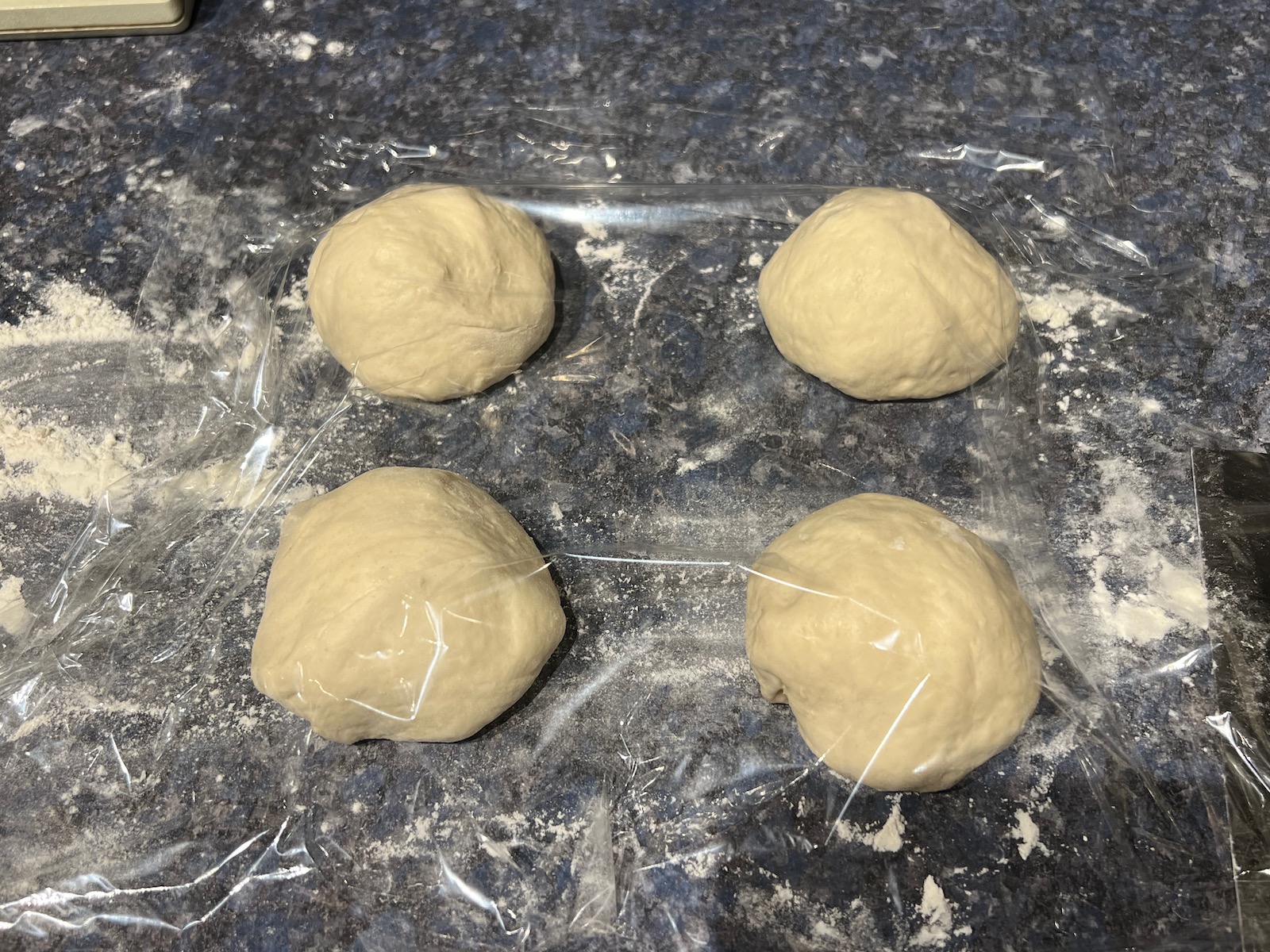 This was too much to fit on a single half sheet pan, so I used two pans. Each crust is a good single-serving size, however. 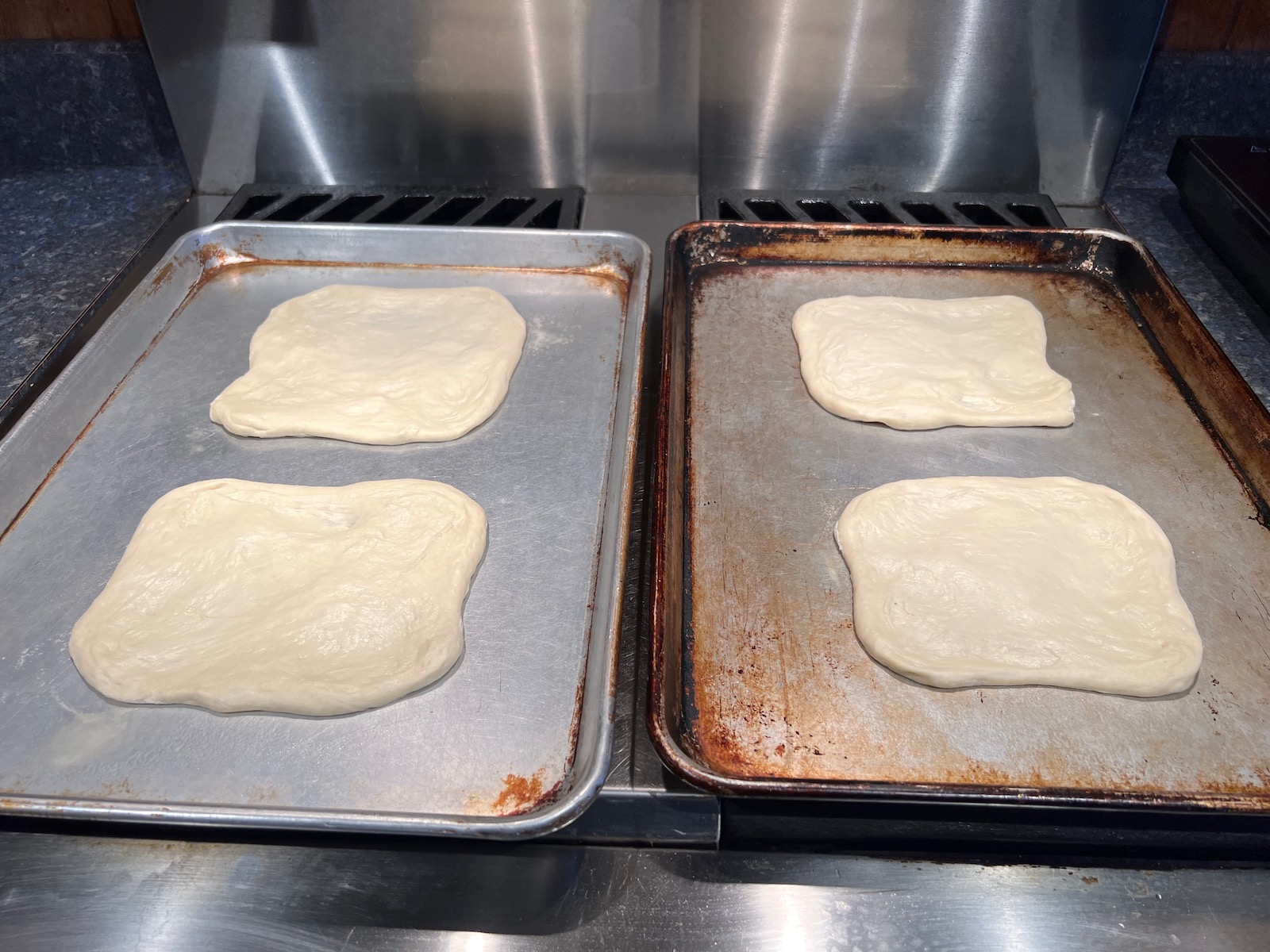 Cooked for 5 minutes at 450°F, then swapped the upper and lower pans in the oven, and cooked for 4 more minutes. 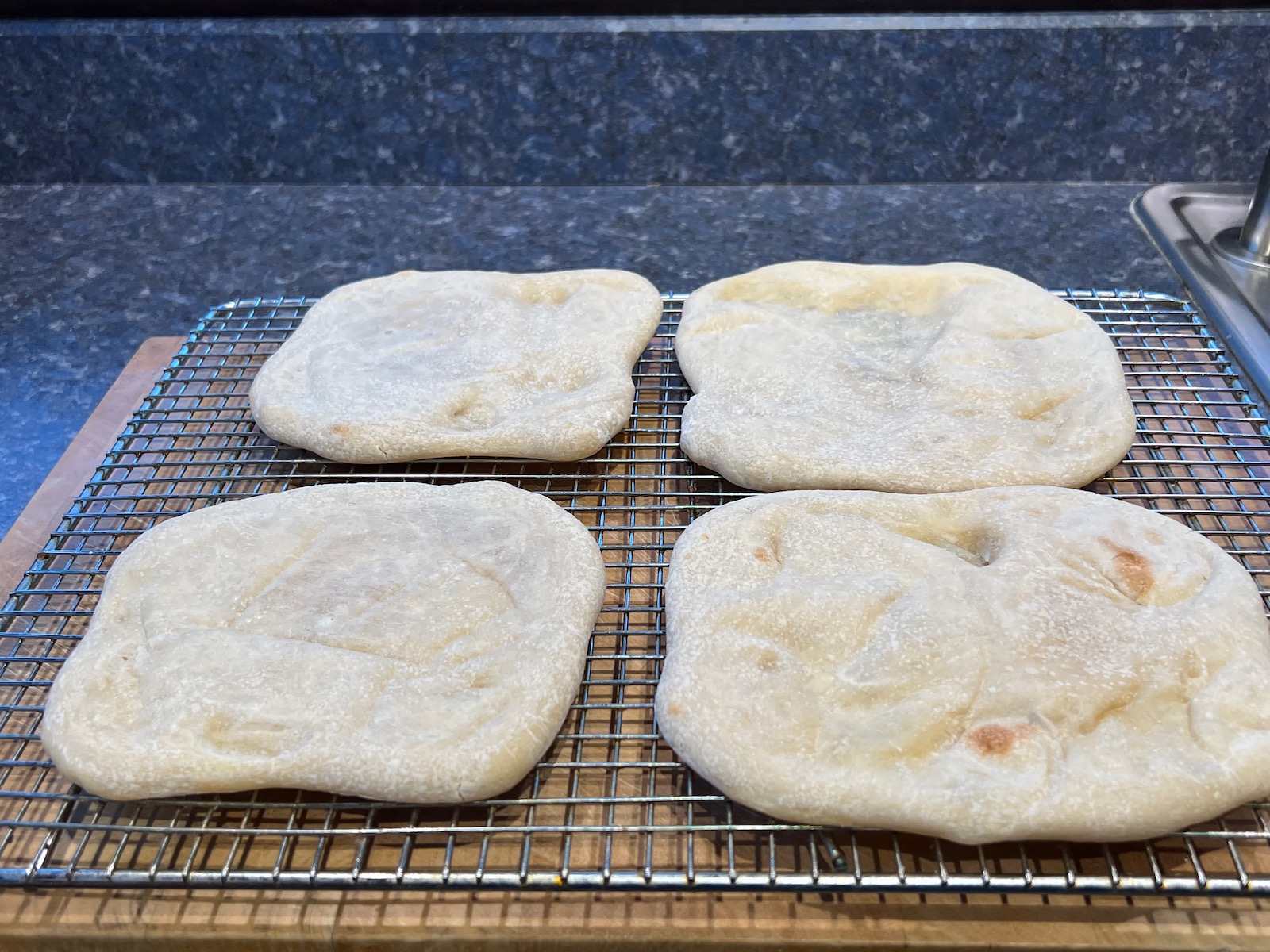 Cooled on a wire rack, put in zip-lock bags, and frozen three servings. Kept one at refrigerator temperature.